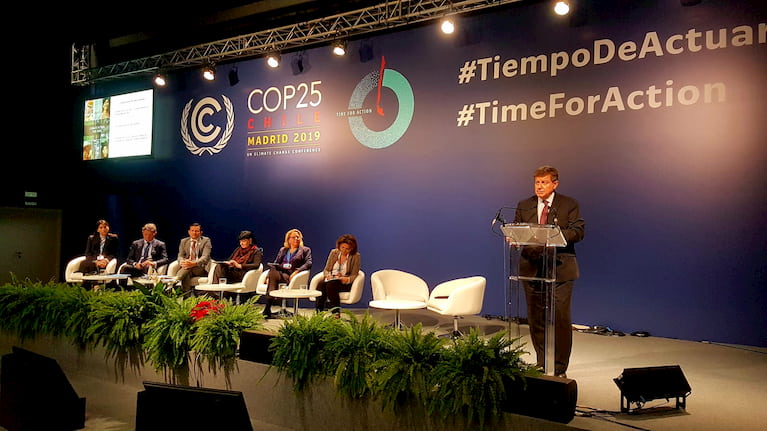 Launched at the COP25 in Madrid, the Climate Action for Jobs Initiative is designed to support countries in implementing their national climate action commitments, while ensuring that jobs, well-being and a just transition remain at the heart of climate responses.

GENEVA (ILO News) – UN Secretary-General, António Guterres, and ILO Director-General, Guy Ryder, have launched the Climate Action for Jobs Initiative , during the COP25 climate change conference in Madrid, alongside the environment ministers of Spain and Germany.

The Initiative provides a roadmap to boost climate action, while ensuring that jobs and human well-being are at the centre of the transition to a carbon-neutral and climate-resilient economy.

Speaking at the launch, UN Secretary-General, António Guterres, said that millions of workers were on the front lines of the fight against climate change. “The answer to the climate crisis lies in transforming how we generate our power, design our cities, and manage our land,” he said. “We must ensure the transition to a low-carbon future is fair and inclusive. That means a future of green and decent jobs.”

“The green economy  is the economy of the future….Many governments and businesses are already racing to capitalize on it and rethinking how to conceptualize value in a new, greener economic model,” he added.

ILO Director-General Guy Ryder told delegates that greening the world of work was “the defining and decisive challenge of our time,” and that “the fight against climate change is inextricably linked with the battle for greater social justice”.

He called for “a jobs-and-human-centred policy agenda for climate action, based on country-level assessments, innovative social protection and strong consensus,” adding that, “the Climate Action for Jobs Initiative can make a major contribution to this work”.

Present at the launching event, Sharan Burrow, General Secretary of the International Trade Union Confederation and Roberto Suarez, Secretary General of the International Organisation of Employers reaffirmed the engagement of workers’ and employers’ organizations for ambitious climate action that delivers decent jobs and a just transition for all.

The Climate Action for Jobs Initiative will focus around three inter-related, complimentary areas; advocacy and outreach; a policy innovation hub that will gather knowledge and generate innovative solutions; and capacity building and support for governments, workers’ and employers’ organizations.

At the COP25, the ILO also launched a new report, Skills for a Greener Future. The report is based on 32 country studies and looks at their skills strategies, as well and some of the issues that have come up as we move towards greener policies. It assesses progress made since 2011, skills gaps and shortages, the amount of reskilling and upskilling and occupational changes required, and the needs of vulnerable and disadvantaged groups.