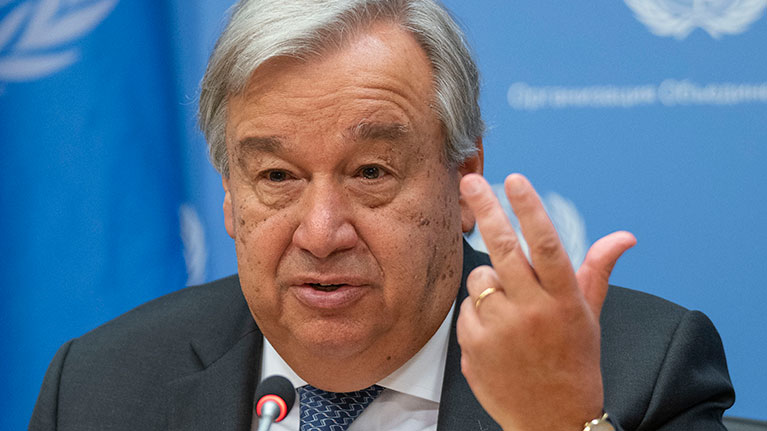 The initiative provides a roadmap for ensuring that people’s jobs and well-being are at the centre of the transition to a carbon-neutral economy.

NEW YORK (ILO News) – United Nations Secretary-General Antonio Guterres has announced a new initiative aimed at ensuring that decent job creation and protecting livelihoods are at the center of countries’ efforts to boost climate action, and urged countries to join the initiative.

The new “Climate Action for Jobs” initiative will be presented at the Secretary-General’s 2019 Climate Action Summit  on Monday 23 September at UN Headquarters in New York City.

The initiative has been developed jointly by the Climate Action Summit, together with the International Labour Organization and other members of the Summit’s Social and Political Drivers Action Area, co-led by Spain and Peru.

The initiative provides a roadmap for ensuring that people’s jobs and well-being are at the center of the transition to a carbon-neutral economy.

“Some 1.2 billion jobs or 40 per cent of world employment rely directly on a healthy and stable environment. Jobs cannot be sustained on a dying planet.”

Mr. Guterres said, “Today – along with the International Labour Organization and partners Spain and Peru – we are launching the Climate Action for Jobs, an initiative to put job creation and protecting livelihoods at the centre of national climate action plans.”

He added, “Some 1.2 billion jobs or 40 per cent of world employment rely directly on a healthy and stable environment. Business cannot succeed on a planet that fails. Jobs cannot be sustained on a dying planet.”

“We will need government, businesses and people everywhere to join these efforts so we can put climate action into a higher gear.”

The ILO Guidelines for a Just Transition , adopted through tripartite consensus, offer a framework to guide the transition to low-carbon economies that countries can make use of.

According to the International Labour Organization, measures to green the production and use of energy will lead to net job gains of some 24 million jobs by 2030.

As emissions increase to record levels and global temperatures continue to rise, the Climate Action Summit aims to galvanize actions that will reduce emissions and build climate resilience. It will launch concrete initiatives that governments, businesses and people everywhere can join to boost climate action.

ILO Director-General, Guy Ryder, who will be attending the UN Climate Action Summit on 23 September, said, “The actors in the world of work – governments, employers and workers – have a key role to play in developing new ways of working that safeguard the environment for present and future generations, eradicate poverty and promote social justice by fostering sustainable enterprises and creating decent work for all.”

Implementation of the initiative will be spearheaded by the ILO, with support from other partners in the Social and Political Drivers Action Area, including the B-Team , the International Trade Union Confederation , and the International Organisation of Employers .

Countries seeking to join the initiative at any point – including after the Summit – or learn more are invited to contact greenjobs@ilo.org.